For information about writing for RCNi journals, contact writeforus@rcni.com

For author guidelines, go to rcni.com/writeforus

TRANSITION IS the planned transfer of care for young people with a chronic disease from children’s to adult services (Blum et al 1993, McDonagh 2005, Foster et al 2017). It involves a period of preparation, the transition process, during which young people are trained in the skills necessary for a successful transfer (McDonagh 2005, Foster et al 2017). If transition is not well managed, however, it will have an adverse effect on the quality, continuity and efficiency of care (Campbell et al 2016).

A clinical transition pathway is a tool to make implementation of transition programmes into routine clinical practice easier. Reviews on transition and transition guidelines have reported several important points that need to be incorporated into care. Overarching principles are planned, developmentally appropriate and holistic care.

A transition coordinator is essential, as is good collaboration between children’s and adult’s services (Singh et al 2016, Foster et al 2017).

During the development process for a specific clinical pathway, it is important to investigate the status of care and identify potential problems and bottlenecks experienced by patients (Vanhaecht and Sermeus 2002). Surveys that explore patients’ preferences and opinions can be used for this purpose (Polit and Beck 2016).

The aims of this study were to:

The survey included four open and 35 multiple-choice questions (MCQs) for patients and five open and 13 MCQs for parents. The surveys included questions about demographics, topics that should have been discussed in clinic but were not, experiences of preparation for transfer and achievement of self-management skills. At the time the study was conducted, the department of paediatric rheumatology had no specific policy or protocol about the process of transition.

Descriptive statistics were used to analyse the results from the MCQs in the surveys. Answers to open questions were labelled and coded; these codes were grouped into concepts. Two researchers (SK, MW) independently analysed the open questions. Differences were discussed until consensus was reached.

All patients and parents gave informed consent and the ethical review board of the hospital approved the study.

When asking the young people if they missed topics that were never discussed during consultations, 35% (n=10) reported they missed discussion of at least one of the following topics:

Experiences of preparation for transfer

Six questions investigated preparation for transition. The answers are summarised below. Almost half of patients never thought about the transfer to adult care and 50% were not informed about the upcoming transfer. The other half heard about transition during the study through a verbal remark that they would soon be transferred to the adult team. No further information was given according to patients. Only three received more information about the differences between children’s and adult clinics. Of patients 16% (n=5) experienced anxiety about the transition. Half said they would like to meet the adult care team before the transfer.

Of parents, 70% (n=23) had thought about the transfer to the adult team, but did not find it necessary to discuss this subject at an earlier stage. However, when specifically asked about the upcoming transfer, almost one third (n=10) of parents had feelings of anxiety and insecurity, and 10% (n=4) had mixed feelings. Most parents expected to experience a difference; they mentioned a less personal approach and being treated more maturely.

In total, 29 (91%) patients were familiar with their diagnosis and 28 (88%) indicated they had enough knowledge about their disease to take care of themselves independently. This was in line with the results from the parents’ survey; most parents thought their child had enough knowledge about the disease and medication to take care of themselves. Most (n=30, 94%) patients knew what medication they used, but only 18 (56%) knew its side effects. Only 12 (38%) patients thought about taking the medication themselves without the help of their parents. Additionally, only eight (25%) patients ordered prescriptions from the pharmacy and five (16%) made the clinic appointment themselves.

The patients’ degree of independence is an important self-management skill. Almost all 88% (n=28) patients attended the outpatient clinic with their parents. Reasons for attending with their parents included fear of forgetting what physicians had told them, finding it difficult to ask questions independently, fear of forgetting questions that needed to be asked, requiring transport to the hospital and parents who insisted on attending. Of parents, 38% (n=13) thought their child could not visit the clinic independently. Half of the parents recognised the importance of their child visiting the hospital independently, but this was not yet current practice. The parents who recognised the importance of independent visits preferred to make this transition in a gradual way.

All results from the patient and parent surveys were used to develop a clinical transition pathway, based on the principles of Vanhaecht and Sermeus (2002) (Vanhaecht et al 2006).

The ITP developed by McDonagh et al (2006, 2015) was used, with permission, to develop the clinical transition pathway. The ITP was divided into three age categories (12-14, 14-16 and 16-18+ years), each with age-appropriate questions covering ten domains. The ITP includes checklists at the end of each age category reflecting which domain goals are achieved and which domains need specific attention in the following period. An ITP to support and guide parents in the transition process was also developed (McDonagh et al 2006, 2015). The Childhood Health Assessment Questionnaire (CHAQ) was incorporated in the transition pathway. The CHAQ measures functional status and is validated for different juvenile rheumatic conditions (Tennant et al 2001, Meiorin et al 2008). 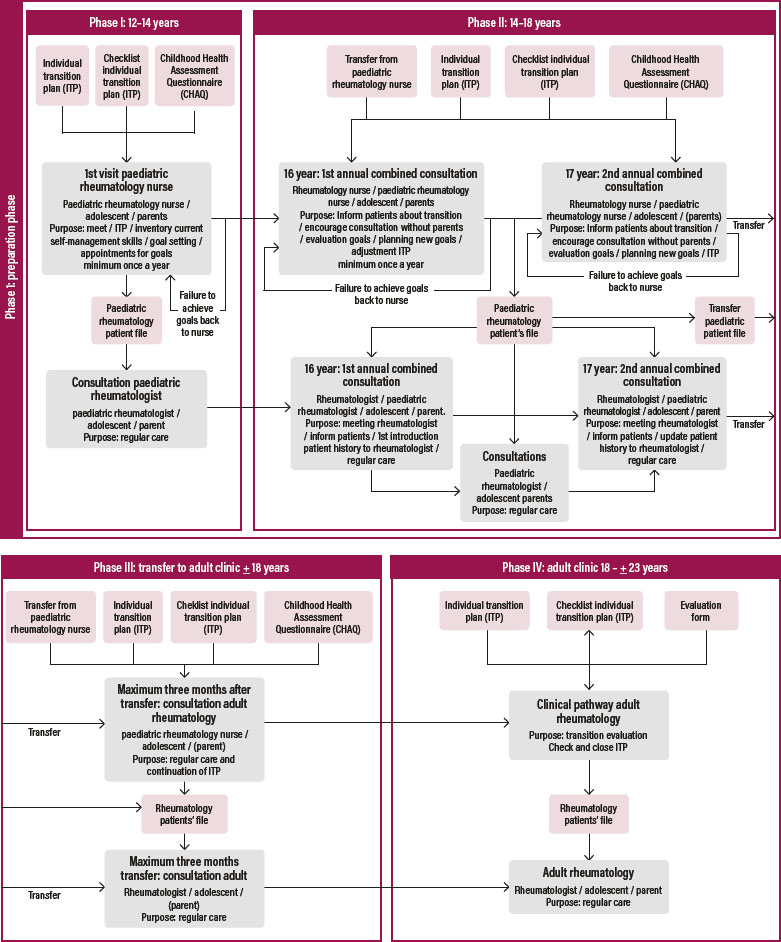 The purpose of the joint consultation is to allow patients and their parents to become acquainted with the adult team and ask questions. The adult team also gets the chance to become acquainted with the young person and be informed about the treatment plan. Knowledge of the treatment plan in childhood and understanding why certain choices were made is important for the rheumatologist to ensure alignment of treatment after transfer. Actual transfer to the adult clinic occurs around the age of 16-18 years, where timing of the transfer depends on the patient’s achieved skills and personal wishes.

This study explored how patients with jRMDs and their parent(s) experience care during the preparation for the upcoming transfer to adult services, and used the results to develop a clinical transition pathway.

Patients and their parents thought current care at the paediatric rheumatology department did not prepare them well enough for the upcoming transfer to adult care. This included lack of discussion of relevant topics in clinic, neglect in self-management skills training and insufficient knowledge about the differences in care between the children’s and adult departments. These themes influenced the development of the clinical transition pathway. 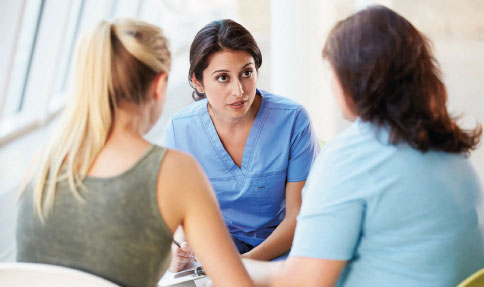 The lack of discussion of topics such as education, vocational needs, sexuality and use of alcohol has been reported in other studies (van Staa et al 2007, Hilderson et al 2012). Discussing these topics and providing information is important and may support the development of self-management skills in decision-making (Rosen 2004, Shaw et al 2004a, Shaw et al 2004b). Adolescents often do not address these topics themselves during consultations (McDonagh et al 2006), possibly because they are accompanied by their parents. In the study, almost none of the patients visited healthcare professionals independently.

Confidence to see health professionals without parents is an important skill for successful transition and supports the development of autonomy (Robertson et al 2006, McDonagh and Hackett 2008, Wells et al 2012). Adolescents who visit the doctor without their parents tend to participate more actively in the consultations (McDonagh and Kelly 2003). Hence, preparing patients from a young age to attend consultations independently is important.

By implementing an ITP early in the transition phase that addresses all these aspects, goals can be formulated, and plans made to stimulate and amplify self-management skills. This will teach young people skills necessary for a successful transition and help them to cope with their disease later in life (Robertson et al 2006, Wells et al 2012). A transition plan is also recommended by NICE (2016) (Singh et al 2016). Many studies support the transition process starting early, ideally at the beginning of adolescence (11-12 years) and at the latest by the age of 14 (White 2002, McDonagh 2008, Hilderson et al 2013, Nagra et al 2015, Foster et al 2017).

When asked about the differences between children’s and adult care, patients and their parents had little understanding. For example, on the one hand you have adult care that is disease oriented and, on the other hand, you have children’s care which is socially oriented. Another difference is the emphasis on treatment and compliance with little or no attention to development, school/study or social function in adult care (Fleming et al 2002).

In addition, they were not always aware of the upcoming transfer to adult care. It is important for patients and parents to understand the differences between the two departments and be prepared for the culture gap (Robertson et al 2006). This may diminish the feelings of anxiety and uncertainty that parents and patients reported when asked about the upcoming transfer to adult care. Anxiety is an obstruction in the transition process (Fleming et al 2002). These feelings may be decreased further if patients and their parents can meet their new healthcare provider before the actual transfer (Rosen 2004, McDonagh et al 2006, Lugasi et al 2011).

A minimum of two annual combined consultations at ages 16 and 17 have been incorporated into the clinical transition pathway (Figure 1). Here, young people and their parents are offered a joint consultation with the children’s and adult care team together in the same room.

Parents need to be guided during the transition process, because it is important for them to feel confident about their changing role. Parents can be overprotective, which may have a negative effect on their child’s developing independence (Eleftheriou et al 2014). Therefore, an ITP to support parents in giving young people control of their clinical care was incorporated in the clinical transition pathway.

Studies have shown the importance of transition coordinators in guiding young people and ensuring all their transition needs are met (Betz et al 2007, Crowley et al 2011, NICE 2016, Singh et al 2016). This role is best fulfilled by nurse specialists as they are trained to address young people’s physical, psychosocial and educational needs (McDonagh et al 2006, Nagra et al 2015) and they can improve transition outcomes (Betz and Redcay 2005).

The clinical transition pathway has been incorporated into the routine care of the rheumatology department and is now under evaluation. Its effect will be reported in a future article.

Study limitations include the small sample size, of patients receiving treatment in a tertiary care hospital in one year. Although the sample was small, the response rate was relatively high (32 of 48) for a survey (Stringer et al 2015). It is possible that those who did not complete surveys would have responded differently; however, the results were comparable with other studies.

This study explored the experience of care in the transition phase. We found that the clinical care does not meet the needs of young people with jRMDs during the transition process. These unmet needs existed because of a lack of discussion of relevant topics, neglected self-management skills training and insufficient knowledge about the differences in care between the children’s and adult departments. Parents were also not guided in the transition process of their child which led to feelings of anxiety for the upcoming transfer to adult care. The clinical transformation pathway, developed in the light of the survey results, is a tool that can be used to improve this transition process by providing holistic care appropriate to young people’s developmental stage and support their parents in this process. 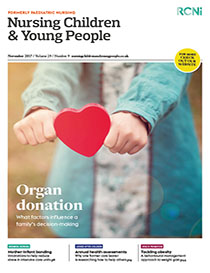 How play specialists can reduce use of anaesthesia during radiotherapy
Radiotherapy practice is complex and daunting for children....

Brain tumours in children: reducing time to diagnosis
Although the leading cause of childhood, cancer-related...

Managing paediatric patients with pyrexia
Pyrexia is the most common clinical complaint seen in...

Share article: Development of a clinical transition pathway for adolescents in the Netherlands