This is an open access article distributed under the terms of the Creative Commons Attribution 4.0 International licence (CC BY 4.0) (see https://creativecommons.org/licenses/by/4.0/), which permits others to copy and redistribute in any medium or format, remix, transform and build on this work, even commercially, provided appropriate credit is given and any changes made indicated.

Of the various factors that influence health outcomes, self-care practices, specifically health behaviours, have a significant role in morbidity and mortality. Since self-care is identified as having an important role in the management and outcomes of chronic illnesses (Qoli et al 2016), and engaging in factors that promote a healthy lifestyle may decrease the rates of mortality (Loef and Walach 2012), there is a need to explore potential underlying factors that may affect a person’s engagement in self-care.

Non-adherence to treatment regimens can be an issue, particularly outside acute care, where there is a greater need for patient responsibility and self-care (Jallinoja et al 2007). Failure to appropriately seek professional assistance and follow treatment plans, and deficiencies in the way individuals care for their own health can affect the course and outcomes of acute and chronic illness (Sanders Thompson et al 2009). These risky health behaviours have also been associated with men who endorse a traditional masculine ideology (Mahalik et al 2007). Orem’s (2001) theory of self-care provides an explanatory framework for examining self-care practices and the influence that masculinity ideology plays on self-care behaviours among men.

Masculinity ideologies are comprised of socially acceptable ways for boys and men to think, feel and behave (Mahalik et al 2003).

BCFs are defined as ‘personal conditions or environmental circumstances’ that may influence individual competence for engagement in self-care actions (Orem 2001). There are ten BCFs (Orem 2001):

BCFs involve cultural, environmental, socioeconomic conditions and other human conditions. They affect a person’s self-care agency, that is the ‘complex acquired capability to meet one’s continuing requirements for care of self that regulates life processes, maintains or promotes integrity of human structure and functioning and human development, and promotes well-being’ (Orem 2001). Racial identity is an addition to the conceptualised BCFs with a focus on its relationship with masculinity ideology.

Racial identity is developed through cultural socialisation, personal experiences and lifelong learning, and may have an influence on the development of how masculinity ideology affects a person’s self-care agency. The influence of racial identity may be an underlying phenomenon resulting from the way in which it is conceptualised during socialisation. The conceptualisation of racial identity is considered a BCF because the sociocultural orientation may affect an individual’s engagement in self-care. Although Orem (2001) named ten BCFs, she acknowledged that they ‘should be amended whenever a new factor is identified’.

Like masculinity ideology, self-care agency is derived from cultural socialisation, personal experiences, and knowledge acquired throughout a maturing individual’s lifespan. Self-care agency is a multidimensional concept consisting of an organised hierarchy of three: a basis of foundational capabilities and dispositions; power components as an enabler for self-care operations; and capabilities for self-care operations (Orem 2001).

The foundational capabilities and dispositions form the base of the hierarchy of constructs that comprise self-care agency. Foundational capabilities are the sensations, perceptions and physical movements that are essential for individuals engaging in self-care. Foundational dispositions refer to the common, prevailing attitudes a person holds, and which affect the goals they seek. These dispositions affect a person’s willingness to view themselves as self-care agents and include constructs such as self-understanding, self-awareness, self-concept, self-image, self-value, self-acceptance, self-concern, and willingness to meet self-needs. These dispositions affect the power component of motivation. For example, an individual’s perception of their worth as a person (self-value) can affect the self-care operations required to engage in self-care behaviour (Orem 2001).

The power components comprise the middle layer of the self-care agency hierarchy of constructs. Power and capabilities are synonymous in their meaning. The power that an individual possesses means that a certain activity can be undertaken, not necessarily that it will be undertaken (Orem 2001). There are ten power components of self-care agency necessary to undertake self-care. These comprise the ability to (Orem 2001):

It is worth considering the comparison between the recognised constructs of masculinity ideology (such as self-image, self-value and self-awareness) as identified by other researchers (Majors and Billson 1992, Addis and Mahalik 2003, Roberts-Douglass and Curtis-Boles 2013), and the dispositions that can affect an individual’s goal-seeking (such as self-confidence, self-reliance and self-esteem), as identified by Orem (2001).

Masculinity ideology conceptualised as a foundational disposition reflects the gender-based beliefs and values that affect a person’s willingness to meet self-care needs or to seek appropriate support in meeting those needs. Studies involving the use of healthcare services, specifically among African-American men, suggest that the men’s decisions regarding self-care are associated with their formulation of masculinity ideology (Whitley et al 2005, Wade 2008, Hammond et al 2010).

As a foundational disposition, the beliefs and attitudes that generate a person’s expectations, goals and behaviours – in congruence with their culturally defined standards of the male role (Pleck et al 1993, Levant and Richmond 2007) – will affect their willingness to view themselves as a self-care agent and accept being in need of, or having the ability to undertake, self-care measures.

Culture as a basic conditioning factor in men

Based on Brannon’s (1976) analysis of what a man is ‘supposed to be’ in US culture, Brannon and Juni (1984) developed the Brannon Masculinity Scale. This 110-item scale measures an individual’s approval of the norms and values that define the male role. For the purposes of this scale, masculinity ideology was conceptualised using four norms, which were defined by David and Brannon (1976):

Men have traditionally been raised to be strong and silent, and act as providers for their families while avoiding vulnerability, tender emotions and femininity. These characteristics were assimilated into a set of seven traditional male role norms ascribed by Levant et al (1992): avoiding femininity, restrictive emotionality, seeking achievement and status, self-reliance, aggression, homophobia and non-relational attitudes toward sexuality.

The degree to which these characteristics are instilled in a man is determined primarily by the culture in which he is raised. Although culture has many proposed definitions, it is defined here as acquired patterns of behaviour, beliefs, lifestyles and characteristic thoughts that contribute to the world-views and decision-making of a certain population of people (Purnell and Paulanka 2008).

During their development, men learn to evaluate their adequacy by matching their preferences, beliefs, attitudes, behaviours and personal attributes with the norms of the culture to which they belong. In their formative years, men begin to internalise motivational factors that prompt them to regulate their behaviour so that it conforms to the culture’s definition of masculinity (Bem 1981). The formulation of these internalised factors is what constitutes a person’s masculinity ideology, and the health behaviour of male participants has been found to be significantly predicted by the perceived normative behaviour of other men in the same culture (Mahalik et al 2007).

Race and culture have accounted for many of the differences in the ways that men subscribe to being masculine (Brod 1987, Kimmel and Messner 1992). Assumptions have been made that the socialisation of men is congruent with the standards of masculinity for their culture (Carter et al 2005). However, there are factors that influence the socialisation of men from differing racial and ethnic groups. Socio-political histories, in combination with the relationships these groups have with the dominant race and culture, causes variations in the development of racial identity (Carter 1995, Helms 1996, Sue and Sue 2013). These variations could influence the unique way men with differing racial identities understand and express masculinity (Carter 1995).

Studies (Denyes et al 2001, Sousa et al 2005, Callaghan 2006) have used demographic questionnaires to assess BCFs, including race, to identify potentially significant relationships. These studies used a demographic questionnaire to assess race as a BCF, with participants asked to identify their racial origin. Although race is an important component to consider when assessing BCFs, asking participants to identify their racial origin alone may project the assumption that members of a specific racial group homogeneously identify with that group. Given that racial identity is developed through cultural socialisation and personal experiences, it is reasonable to expect differences among members of the same racial group, necessitating the need to explore the dimensions of racial identity as a BCF. Since racial identity has dynamic properties that may influence the development of masculinity ideology and ultimately a person’s self-care agency, both components must be considered when addressing health behaviours. 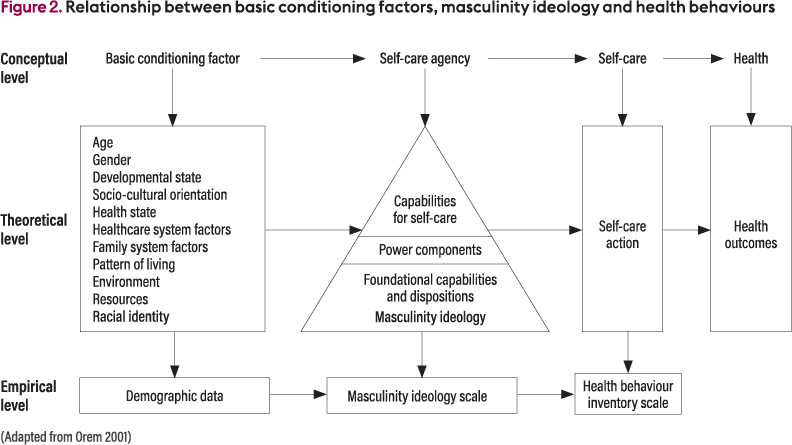 Nurses must diagnose an individual’s ability to engage in self-care at the time of the initial assessment as well as in the future. Nurses must accurately assess patients’ self-care agency to establish their rationale for making judgements. In this way, the nurse can choose a reliable and valid method of providing support, as well as designing and implementing care plans (Orem 2001).

It is imperative that healthcare providers understand the specific aspects of masculinity ideology that have the potential to affect self-care behaviours, particularly among men from diverse racial backgrounds.

Self-care is crucial to the promotion of health and the prevention of complications during treatment, recovery and rehabilitation from disease. Masculinity ideology is a critical dispositional variable among men from different cultures that deserves ongoing examination to understand its influence on self-care behaviours. 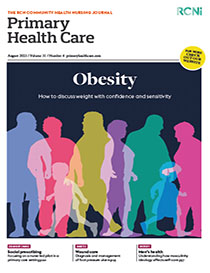 Focus on patients with a family history of cancer
The breast cancer risk assessment service (BCRAS) at Guy’s...

Saudi Arabian women’s experiences of breast cancer treatment
Aim The aim of this study was to explore the cultural...

Management of chemotherapy-related arm symptoms in patients with breast cancer
Anthracyclines are used widely as part of combination...