Why you should read this article

Open access This is an open access article distributed under the terms of the Creative Commons Attribution-Non Commercial 4.0 International (CC BY-NC 4.0) licence (see https://creativecommons.org/licenses/by-nc/4.0/), which permits others to copy and redistribute in any medium or format, remix, transform and build on this work non-commercially, provided appropriate credit is given and any changes made indicated

Acute hospital services across the UK are operating in an increasingly complex and challenging environment. The demand on services is increasing, with rises in the number of both attendances at emergency departments (EDs) and inpatient admissions (Baker 2017). This increased pressure on services is compounded by the UK’s demographic trend towards an ageing population (Office for National Statistics 2018), characterised by multifaceted patient needs and co-morbidities. Workforce challenges add to this pressure, with significant staffing shortages in various healthcare professions (Department of Health Northern Ireland 2018, Beech et al 2019). These pressures are further exacerbated by the strained financial climate, with budgets not increasing in line with service demand. Instead, ongoing efficiencies and savings are required to ensure that care continues to be delivered and services provide optimal value for money (Smith et al 2014, Lafond et al 2016).

These challenges represent a significant risk, potentially having an adverse effect on patient safety, quality of care and patient experience. Evidence has shown that care quality can be compromised when healthcare organisations have to cut back services to ‘core’ diagnostic and treatment activities, meaning that other important aspects of care are not provided (Robertson et al 2017).

Similarly, low levels of well-being affecting staff have been linked to suboptimal patient outcomes and experience (Sizmur and Raleigh 2018). Healthcare professionals often come under extreme pressure as they attempt to manage the gap between demand and capacity by working additional hours and with increasing intensity (Robertson et al 2017).

In this pressured environment, human error is more likely to occur because staff do not always have adequate time, energy and support to undertake their duties effectively (Carayon and Gurses 2008, Hall et al 2016). This has a negative effect on patient safety, increasing risk and potential harm (Cimiotti et al 2012, Hall et al 2016).

In the context of these challenges, experiencing pressure is the norm for staff in acute care settings. However, in some such circumstances staff experience unusually high levels of pressure, for example, at certain times of year, during outbreaks of infectious disease or in emergencies. To preserve patient safety and quality of care, it is essential for staff in acute hospitals to be able to identify when they are in a period of extreme pressure.

To identify periods of extreme pressure, most hospitals in the UK have escalation policies that indicate when intensified effort is required to cope (Back et al 2017). Escalation status is usually assessed based on triggers relating to demand, capacity and system flow, such as increased ED activity, delays in ambulance turnaround or high bed occupancy (Royal College of Emergency Medicine 2015). The identified escalation status then leads to actions that are aimed at responding to and de-escalating pressure, and ensuring site safety and service continuity (Boyle et al 2012, Back et al 2017). While escalation policies are well established across acute hospital sites, at times they fail to achieve their intended results because they do not adequately differentiate between typical variation in pressure and periods of extreme pressure. As a result, ‘high alert’ often becomes the norm, which detracts from the meaningfulness of the status, undermining its purpose (Kershaw 2018).

To overcome this issue, the Antrim Area Hospital Early Warning Score (HEWS) was developed as a service improvement tool in the Northern Health and Social Care Trust in Northern Ireland. Rather than using escalation triggers, the Antrim Area HEWS uses a numerical score from 0 to 49, based on eight indicators.

This score is mapped to escalation categories from low to extreme pressure, with each category associated with corresponding escalation actions. This article outlines why and how the Antrim Area HEWS was developed, the components of the tool, and the benefits it has provided for the trust since its implementation.

Escalation issues at the site

Before the Antrim Area HEWS was developed, the Antrim Area Hospital site was using a green/yellow/amber/red escalation framework. The escalation status of the site was assessed using a list of 14 triggers including ED triage time, inpatient bed availability, predicted intensive care unit (ICU) capacity and the availability of community care packages.

When the hospital was in amber or red status, regular escalation meetings were chaired by members of senior management to assess and respond to the situation. This escalation framework had significant limitations. For example, information on all 14 triggers was not readily available, which meant that full implementation of the framework required a significant amount of extra information to be obtained. Since this was not always practicable, the assessment of pressure tended to be subjective, based on ED activity and bed capacity.

Another issue was that the average bed occupancy at the Antrim Area Hospital site is more than 95%, meaning that its escalation status was rarely below amber and was red for much of the winter. Continuous amber or red status led to ‘escalation fatigue’, which is commonly experienced by staff in acute hospital sites where a high alert status becomes normalised, consequently reducing the usefulness of amber or red status as a trigger for particular actions (Kershaw 2018).

Meanwhile, the development of a site coordination model in Antrim Area Hospital had removed the need for escalation meetings. In this model, one person is in overall charge of the hospital from 8.30am to 8.30pm, seven days a week. This coordinator is based in a central hub, and chairs two-hourly capacity meetings, focusing on site safety and system flow.

This model enabled a proactive response to increasing pressure so there was no need for additional escalation meetings. However, there was still a need for an appropriate system-wide response at times of extreme pressure, and the escalation framework was not providing this effectively.

Development of the early warning score

The Antrim Area HEWS was developed with the following objectives:

The Antrim Area HEWS was developed using a plan-do-study-act methodology, with the Antrim Area Hospital’s site coordinators acting as a test and reference group. Each version of the Antrim Area HEWS was trialled by the site coordinators, who made comments and suggestions that informed the next version. Initial versions of the tool focused on the number of patients in the ED and predicted bed capacity, but this was thought to be too narrow a view of the pressures experienced by the hospital site. Therefore, the number of indicators used was increased to eight, including information on nurse staffing and delayed transfers of care, to ensure that the tool was sufficiently holistic.

The site coordinators set the Antrim Area HEWS scoring thresholds based on their experience and using historical data. For example, hourly ED occupancy data from 1 October 2016 to 30 September 2017 were used to identify how often various occupancy levels were experienced in the ED. For scoring purposes, these data were split into six bands (Table 1). This provided the scoring thresholds for one of the indicators in the HEWS scoring matrix: total number of patients in the ED.

The criteria are scored and weighted as shown in Figure 1, resulting in a total score between 0 and 49. This score is then mapped to one of five escalation levels from green (low pressure) to black (extreme pressure) (Figure 1).

An important part of implementing the Antrim Area HEWS was to develop and agree effective actions to be taken when higher escalation levels were reached. A series of workshops and other engagement exercises, such as participating in team meetings, produced a total of 73 actions across 26 service areas, including community hospitals, mental health and other non-acute services inside and outside the trust. These actions were allocated to either severe or extreme status, and included: reprioritising work, reviewing elective activity, shortening the approval process for community care packages, sending alerts to local nursing home providers and using social media to keep the public informed of the situation.

Figure 2 shows the Antrim Area HEWS categories for the scores recorded in Antrim Area Hospital between 1 January and 31 December 2018. The highest scores were recorded in the early part of the year, with 60% of extreme scores occurring during January. Severe or extreme categories applied for 73% of the time in January, compared with only 6% in May. Table 2 shows that 45% of scores across the year were in low or moderate categories, and that the hospital spent only 3% of its time in extreme escalation. This analysis provides assurance that the Antrim Area HEWS scores reflect real pressures on the site, which are increasingly extreme over the winter period, and that it is appropriately calibrated and indicates extreme status only in the most pressured circumstances. 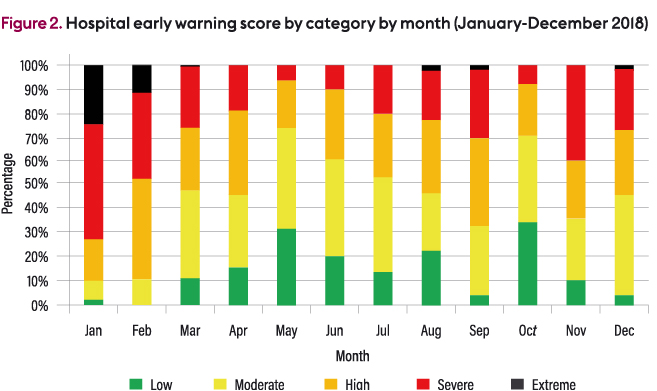 An online staff survey in March 2019 explored awareness and experiences of the Antrim Area HEWS among senior medical, nursing, allied health professional and managerial staff. A total of 232 survey invitations were sent out and 53 responses were received, yielding a response rate of 23%, although not all respondents answered every question. The survey responses identified that:

The Antrim Area HEWS was introduced in October 2017. After the first full year of use, several benefits have been identified by the site coordination team:

Learning from the implementation process

Designing and implementing the Antrim Area HEWS was a learning experience for all those involved in this process. Some of the learning gained from the implementation process included:

The development of the Antrim Area HEWS has been a significant step forward in the trust’s management of site-level pressure. It has provided the Northern Health and Social Care Trust with a quick, objective method of assessing pressure on the site, and has raised awareness of hospital pressures and increased support for escalation actions from service areas throughout the hospital and beyond. It has also enabled the trust to develop focused, meaningful escalation actions and to trigger these only when appropriate.

Other trusts in Northern Ireland have begun developing their own HEWS tools, and this may provide a basis for managing regional escalation. One challenge experienced by many acute sites is how to respond to periods of increased pressure effectively, and the authors recommend the HEWS as one potential approach to achieving effective escalation. 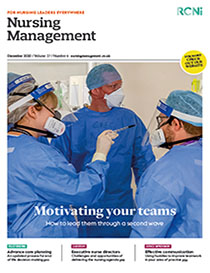 Identifying and meeting survivorship needs
This article reports on the development and delivery of a...